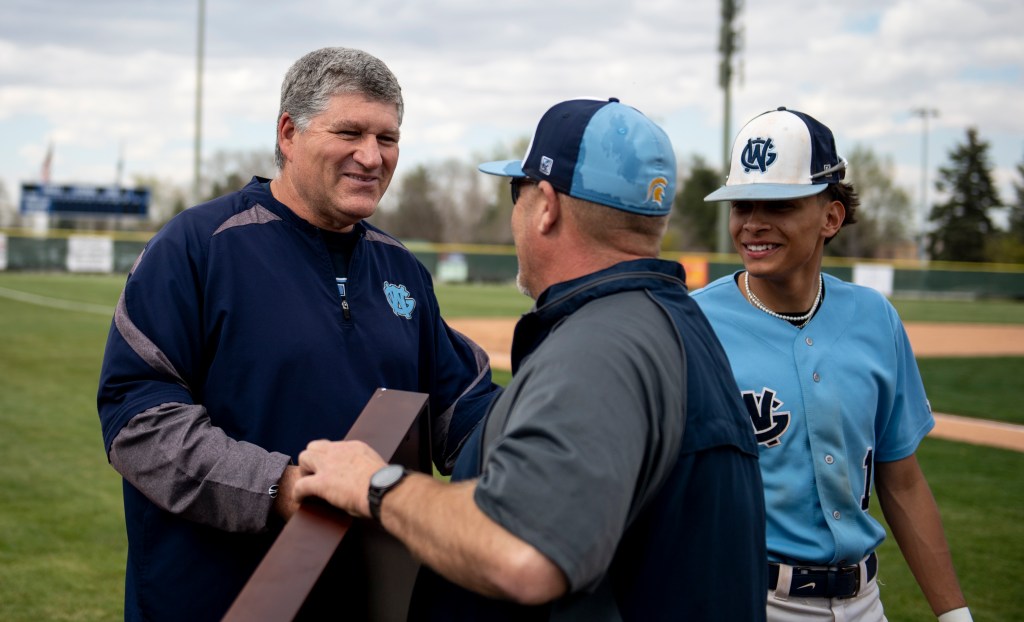 Tracing the lineage of coaches in Greeley West’s baseball program is like playing connect the dots.

Naturally, when nearly a dozen former Spartans head coaches and assistants took to the field on Thursday afternoon, there weren’t many “nice to meet you” exchanges. Heck, there wasn’t even a lot of “long without seeing”.

Just before the first pitch of Greeley West’s Northern Colorado Class 4A/5A Athletic Conference game against Skyline at Butch Butler Field, the Spartans recognized and honored many former coaches of the program.

The coaches exchanged pleasantries and received gifts – like framed Greeley West jerseys – before posing for photos.

The Tribune caught up with a trio of former Spartans head coaches.

Here’s what everyone had to say about the ceremonial pre-game festivities:

“It was special and very nice for Coach Ryan (Jones, the current Spartans head coach) to do this. Some of my kids aren’t even here anymore. And here I am at 82. It’s been almost 50 years we won the state championship 50 years ago we won four Northern League Conference baseball championships That was a long time ago But I’ll tell you what, winning the League of the North four times and go to the state final twice and win it once – I had really good kids.

“It’s nice to be honoured. You think about it, you have a lot of good memories. And a lot of those guys have played for me in the past. So it was good to reconnect with some of them and see them again. I feel privileged to be part of the Greeley West baseball program.

“It’s really cool to be able to bring everyone together. … At one point we had done 50 years of baseball with five guys (as head coach). Some schools go five years with five different coaches. So we have a lot talked about the stability we had within the baseball program at Greeley West. … I’ve coached a lot of great kids and done those runs through to the last four (in 2006 and 2010). But also, being able to coach my two kids – Brandon (2014) and Tyler (2019) – were awesome Not many people get the chance to coach their own kids from tee-ball through high school.

In addition to the aforementioned head coaches, Larry Brunz was also honored. Brunz was the Spartans’ third head coach (1976-89). He was unable to attend the ceremony.

Bobby Fernandez covers high school sports for the Greeley Tribune. Reach him at (970) 392-4478, by email at [email protected] or on Twitter @BobbyDFernandez.

Chaos before the convention: the tactics of the Democratic candidates questioned | New