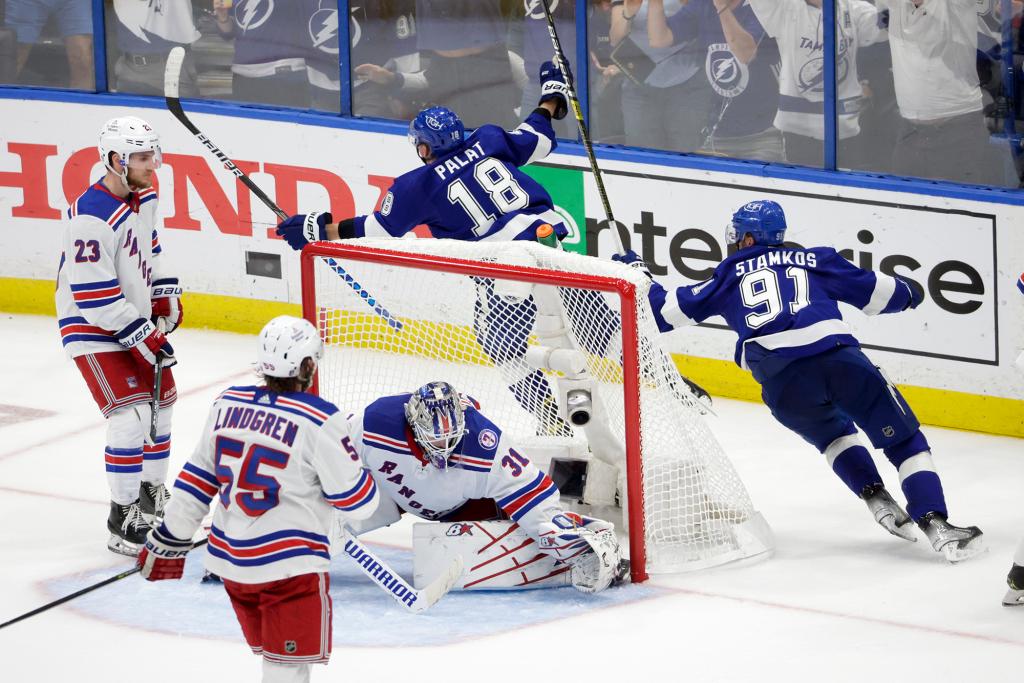 TAMPA, Fla. — Gerard Gallant is unhappy with the Lightning’s treatment of goaltender Igor Shesterkin. And the Rangers manager plans to have a conversation with the league about it.

“I don’t like it,” Gallant said. “I don’t think that’s a big part of it and hopefully when we talk to the supervisor tomorrow they’ll take care of some of that because it wasn’t right.”

The supervisor Gallant was referring to is Kay Whitmore, appointed by the league to oversee the series. Whitmore, a former NHL goaltender, is now the NHL’s goaltending supervisor.

The Lightning appeared to emphasize Shesterkin’s face in an attempt to throw him off his game, starting several scrums around the Rangers crease. At one point, Corey Perry took a penalty after the referees ruled he had gone too far with Shesterkin, leading to Mika Zibanejad’s first goal at 7:37 from the second. Riley Nash also picked up a goaltender interference penalty at 8:23 of the second, leading to Chris Kreider’s power play goal.

The Rangers’ lead didn’t last, however, as the Lightning came back for a 3-2 victory on Sunday afternoon, cutting New York’s lead in the Conference Finals to 2-1.

Lightning coach Jon Cooper said it wasn’t part of their plan to get physical with Shesterkin.

“I don’t think they could have called it tighter,” Cooper said. “There were three penalties for interference with a goalkeeper [between both teams]. Is any part of this game sharp in front? Yes. Was that part of our game plan, to overthrow him? No. This first penalty, we were on the power play four against three and we got rid of it.

“Believe me, we’re not trying to hit the keeper. I think we were angrier than maybe Rangers at that time.

Intentional or not, it had little effect on Shesterkin as the Russian continued his Herculean play, stopping 48 of 51 shots. All three of the Lightning’s goals came on point shots when Shesterkin just couldn’t do much. For much of the third period, he kept the game tied, as the Lightning mounted an assault.

“I guess whenever there’s an elite keeper who plays that way, I think that’s kind of the other team’s mantra is to try to get in their face. said Rangers striker Andrew Copp. “Try shaking it a bit. But it seemed like Shesty handled it very well today.

“I thought our team was too. Just try to limit the clashes in front of the net. I think they got a few early and then we did a pretty good job of getting them out of the net. It will be a factor – a goal for us is to win the blue paint battles.

Even Gallant admitted he was more embarrassed than Shesterkin

“That baffles me more than he does,” Gallant said.