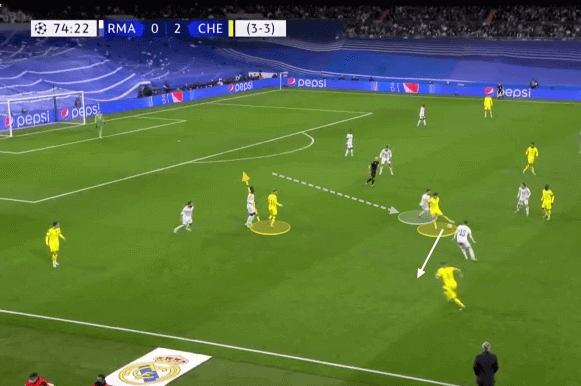 On the two legs, Chelsea can be disappointed not to have progressed. Thomas Tuchel’s side were smarter structured, superior at pressing in forward positions and better at advancing the ball.

But it was a classic victory for Carlo Ancelotti. Sometimes his side was dramatically deformed. At times they struggled to find a ball after winning the ball, conceding it cheaply to Chelsea. But the Italian is still a master at getting the most out of top players, especially experienced operators who don’t need a lot of one-on-one coaching.

The tie was essentially won by two players: Karim Benzema, who scored three goals in the first leg and one in the second leg, and Luka Modric, who assisted Real Madrid’s other goal in the tie with a remarkable outside pass. for Rodrygo.

Chelsea were the most cohesive unit, but Real had the stars.

However, judging the second leg performance only, it was a victory for Tuchel’s Chelsea. They won 3-1 in regular time, and 3-2 if you also consider overtime. They also saw a Marcos Alonso goal disallowed for a VAR handball decision. All in all, Tuchel’s plan worked well – and two of Chelsea’s goals were excellent.

The image below shows the general pattern of the game. Having used a three and a four defense in recent weeks, Tuchel’s approach here was a hybrid: more of a back three in attack, more of a back four in defence.

The most interesting thing was the roles of the wingers. Down the left, Alonso pushed aggressively which forced Federico Valverde to drop back to form a back five. On the right, Ruben Loftus-Cheek would drift inside to help Chelsea go three-on-three in midfield, leaving width on the right to Kai Havertz or Reece James from deeper.

Havertz and Timo Werner played from distance, with Mason Mount as No.10.

And while it’s perfectly reasonable to look at the tie and cite Benzema as the difference, two of Chelsea’s goals came because they doesn’t using a proper centre-forward and using his full-backs to bring Real centre-backs out.

Here is their opening. Loftus-Cheek moved inside the No. 10 position and found space between the lines, with James on the right. Mateo Kovacic sends the ball into Loftus-Cheek…

…and that draws Real Madrid’s two centre-backs, David Alaba and Nacho, onto the pitch to shut it down. Loftus-Cheek immediately plays the ball, at an awkward height for Werner…

…who cleverly deflects the ball forward into Mount’s path, penetrating the space created in the middle of Real’s defence…

…before applying a brilliantly calm finish. Note how Real’s centre-backs are both outside the box after being bypassed, with the two full-backs forced to converge in an attempt to stop Mount.

After Antonio Rudiger’s fine header from a corner gave Chelsea a 2-0 lead on the evening, their third goal was similar to their first.

A rotation to the left means Kovacic is at left-back, Werner is at the left wing and Alonso has briefly taken on the centre-forward role. He comes towards the game and Werner plays the ball at his feet.

Alonso acts as a good hold-up striker here, stepping back to tempt Nacho from defence, using his body to shield the ball and then playing it to Kovacic. Alonso’s move is a signal for Werner to sprint into the space created…

….and his run is found by Kovacic’s fine ball behind. Werner had plenty more to do but beat two defenders before finishing.

Being 3-0 at the Bernabeu is as good as it gets, but Chelsea’s momentum was halted by Modric’s sublime assist.

Ancelotti’s starting tactics seemed disjointed but he deserves praise for his substitutions. Rodrygo’s introduction almost instantly brought that crucial equalizer into the set. Toni Kroos wasn’t happy to be substituted, but his replacement Eduardo Camavinga was excellent in the closing stages. And Nacho’s departure through injury meant Ancelotti had moved Dani Carvajal to the center of defence, where he looked more comfortable than Nacho in that role, and also more comfortable than only appeared at right-back.

It’s also worth pointing out that this was the first Champions League draw to go into overtime since the away goals rule was scrapped. And while that would have been the case regardless of the rule change – both legs finished 3-1 against the opposing team – it was a new situation for the final half hour.

Previously, the away goals rule worked well as a leveler in extra time: it effectively acted as decent compensation for the away team, who were forced to play 30 minutes with no home advantage.

Statistically, it was always better to be at home in the second leg, with around 55% of games settled in overtime (i.e. not counting penalties) won by the team with home advantage. About 31% of the time the away team won. And for the remaining 14%, the extra period itself ended 1-1 or 2-2, meaning the away team triumphed on the away goals rule.

In other words, overtime was previously around 55-45% in favor of the home team – a very good balance. Without the away goals rule, the home side have a much bigger advantage and Real Madrid were the first team to take advantage of it.

Heath sits at the top of all 6As