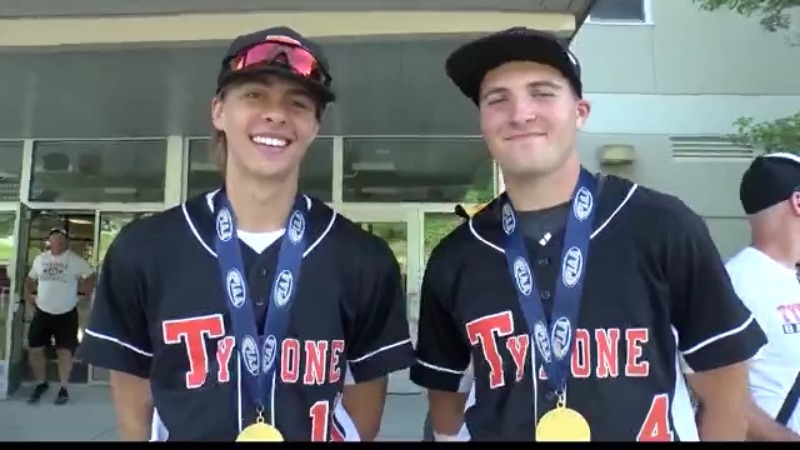 BLAIR COUNTY, Pa. (WTAJ) – After Tyrone’s historic State Championship victory, two best friends, who have been together since birth, reflected on a promise they made to each other after the tragedy.

â€œOur friend Adam, he died of cancer in the fourth grade,â€ said Brandon Lucas, a graduate of the Tyrone Golden Eagles baseball team. With his best friend and teammate Rodney Shultz by his side, after the baseball team’s very first State Championship. â€œSo every year since Rodney and I made it our job, we were going to do something good for Adam, something special. And it’s here, it’s for Adam Fink.

The two graduates have been together since day one … literally

â€œYou can’t even imagine how close we are,â€ Shultz said. Our mothers were pregnant together. All along the way, we were best friends together until the end.

But the dynamic duo, â€œThunder and Lightning,â€ as their mothers call them, was once a trio. Growing up side by side, Lucas, Shultz and Fink were playing wiffleball in the backyard, dreaming of a day like today.

Although Adam is no longer with them, they took to the field today knowing that an angel was watching them from above.

â€œI knew it from the start. I looked up and saw that bright blue sky, a beautiful sun looking at us and I was like I knew he was up there looking at us, â€Lucas said.

The team used the motto â€œDo it for Adamâ€ throughout the season. And now they can finally sayâ€¦ they did it for Adam.

â€œFrom the very first game of the state playoffs and I felt like it was too good to be true, you can’t end defeat. It’s for Adam, we can do it, â€Shultz said.

Register now for the WTAJ newsletter for the latest local news, weather and community events that matter to you.